If you’ve been following our Supernatural Synchronicity series then you know that this is the final post from Sarah Chumacero and I. It’s been a heck of a ride that’s for sure, we’ve touched on philosophy, physiology, psychology, physics and more, whilst we searched for an understanding of the paranormal. With our week by week relay of blog posts alternating between our websites we hope that we have delivered a thought provoking series that will help some look at the paranormal with a new perspective. We hope that this will ensure that discussions occur and most importantly questions are asked always. After all the most important part of what we do is questioning the unknown, but equally questioning what we think we know.

Just like the Avengers, Sarah and I reach the end of an era, so this post is our Endgame, so to speak. Plus as we are both Marvel film fans and couldn’t wait to see the Avengers Endgame film, it seems a fitting title for this latest and final post in the Supernatural Synchronicity series.

Personally I would like to take this opportunity to thank Sarah for all her hard work on this series. A part of the Supernatural Synchronicity idea was to have us answer each other’s posts or at least focus on a small part of our posts and utilise that as focal point of our next post. Sarah certainly didn’t disappoint in this area either, continuously providing informative detailed perspectives that helped me write my posts with ease. It’s without doubt that the discussions between Sarah and I have taken some interesting twists and turns throughout this series, but like the vastness of this subject there is so much more left to cover.

Our Endgame tells us that its probable that the source of paranormal is likely to be related to three main areas; physiology, psychology and physics. Personally I think it’s more a case of the right combinations within these areas that generate the distinctive varying and types of activity that we often encounter in those darkened old buildings in the dead of night. We need to gather as much data as possible to gain a full understanding of this moving forwards, which means logging those anecdotal accounts of experiences, the data from various gadgets logging environmental and possibly physiological changes and anything else that could help us build a picture of these strange events. Then the data can be analysed for patterns to help us discern probable source. This could possibly even show us an interesting link with time, just like Avengers Endgame. Incidentally I liked the Avengers Endgame version of how time travel works, brilliant approach, although it throws Back to the Future completely out of the window. 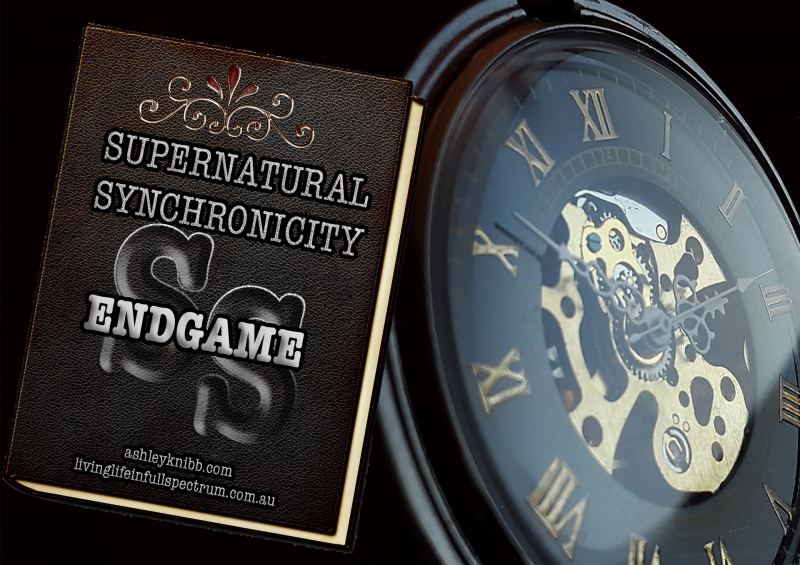 Part of the journey is the end!

In the trailer of the movie ‘Endgame’, Tony Stark bravely professes the above quote. I find it rather fitting in our own journey here with Supernatural Synchronicity. Ashley and I became friends at least a year before we started writing together. What followed was lots of late night conversations about paranormal theory (and I guess nerdy things like Marvel movies and the fact that we both work in IT). We often did the thing that people do where we say ‘oh we should do something together!’. You keep saying it and nothing really comes of it. Except in this case we made it happen and I am so grateful that we did. I have said it to him personally many times before, but I want to thank Ashley for really pushing and challenging me. I wasn’t the type of person that really thought of themselves to be capable of delving into things like paranormal theory. In all honesty, I found the concept of wading in the pools of academic material to be overwhelming and frightening. Like many people who are on this journey researching the paranormal, I had reached a point myself where I was a bit bored and tired of what I was doing. I had done the same thing for several years, and I was ready to start exploring other avenues. For myself, there were only so many EVP sessions I could do before I thought to myself, there has to be more to this. Opening the door to Supernatural Synchronicity quite frankly revived my love for the paranormal and opened my eyes to things i would have never considered before. If there is anyone out there that feels the same as I did, I want to encourage you to open that door and take a peak inside. It can be scary and overwhelming but I promise you won’t regret it. Ashley made this process effortless with his content and wisdom, and even gave me some much needed encouragement when I needed it. It was a true collaboration and if you only take one thing out of this series, we want it to be that we were able to show that two people who society in some ways pits against each other in a competitive nature as paranormal writers from opposite ends of the worlds can work together to make something amazing and that is what I felt like we did. This project was never about just Ashley and I. Our aim was to collectively get as many people involved in the conversations as possible. While it may be the end of this series for now, it is certainly not the end of the journey. If anything, it is only the beginning.

The conversations themselves in this series covered a multitude of areas with my favourite being philosophy. Philosophy itself encourages us to look at things from a different angle and really pick apart a thought process. I feel that this is quite fitting when applied to the paranormal field. We as researchers and investigators need to be asking the bigger questions. We need to be looking at things from a range of perspectives. I don’t think we can necessarily just classify paranormal phenomena into a spiritual or a scientific explanation. It almost feels like there has to be a Black or White answer. You either have to believe or be a skeptic. The things is, there is a large and wide grey area here that can fit into many boxes and it does not yet have a label. We can’t discover anything without challenging, questioning and exploring. I spoke above about the journey and it is something I talk about a lot, even if it can sound a bit cheesy. A researcher or investigator, whatever you want to label yourself is on a journey. You take many different turns, you reach dead ends and often you redefine your path. Sometimes the questions might seem a bit out there, but at least you are asking. We have to have an open mind to at least consider new ideas, regardless of how strange they may seem. There was a time when the concept of a telephone where you could video call someone would have been thought of absolutely impossible. People thought an aero plane was insane. Quite simple, if you don’t at least ask a question, you may never get an answer.

From starting the series by questioning the source of psychical phenomena, we have been able to potentially narrow down and offer some possibilities worth consideration. It is now time to explore those possibilities further. Before we do that though, let’s look at the Supernatural Synchronicity journey so far:

The Source of Psychical Phenomena, what part does the pineal gland play? – Sarah Chumacero

Seeing the unseen and understanding the unknown – Ashley Knibb

Ghosts of the mind – Ashley Knibb

Getting down to the soul of it – Sarah Chumacero

What exactly are we looking for? – Sarah Chumacero

Can we simplify the unknown? – Ashley Knibb

Is time the key? – Sarah Chumacero

Could one Universe affect another?– Ashley Knibb

Is it naive for us to think that Psychical Phenomena could be limited to just the one explanation? – Sarah Chumacero

Are we capable of finding answers?– Sarah Chumacero

Although Sarah and I will no longer be posting more Supernatural Synchronicity posts this year, we have decided to compile all the posts (listed above) into a single book to make them a little more accessible. However we don’t think that is quite enough for our dedicated readers, so we decided to give you all some additional content that cannot be found online in the book too. This maybe be our Endgame, but the next phase is about to begin for us in which we will bring you a Supernatural Synchronicity book with a lot more content. This is something we are aiming to complete and have out by November time, fingers crossed of course.

We hope you have enjoyed this series. Do you have a favourite topic or article we have discussed? We would love to hear your thoughts.

This site uses Akismet to reduce spam. Learn how your comment data is processed.

This Blog should hopefully cover some of my experiences whist investigating the paranormal, a few pieces of historical interest on locations I have investigated, a little bit on paranormal theories and some discussion on paranormal techniques. With some general updates and possibly even a little humour too!

I hope you enjoy and comments are always welcome.